"Beginnings" at the Normansfield Theatre

Thanks to all those who joined Julia Drager (violin) and me at a packed Normansfield Theatre for an afternoon of music for violin and piano. I hope you enjoyed listening as much as we enjoyed playing.

The idea of "beginning" permeates much of this afternoon’s programme. The first part features two classical works which are considered landmarks in establishing the violin sonata as a distinct musical form: Mozart’s K304 and Beethoven’s Opus 24, long known as the “Spring” Sonata for its good-natured lyricism and vitality. Brahms’ Scherzo is his earliest instrumental piece and the product of an emerging musical collaboration with Robert Schumann and the violinist Joachim. Transcriptions of songs by Fauré and Rachmaninov explore the connection between beginning and loss. And the recital ends with an echo from the start: Kreisler’s ostentatious and witty reworking of the classical minuet. 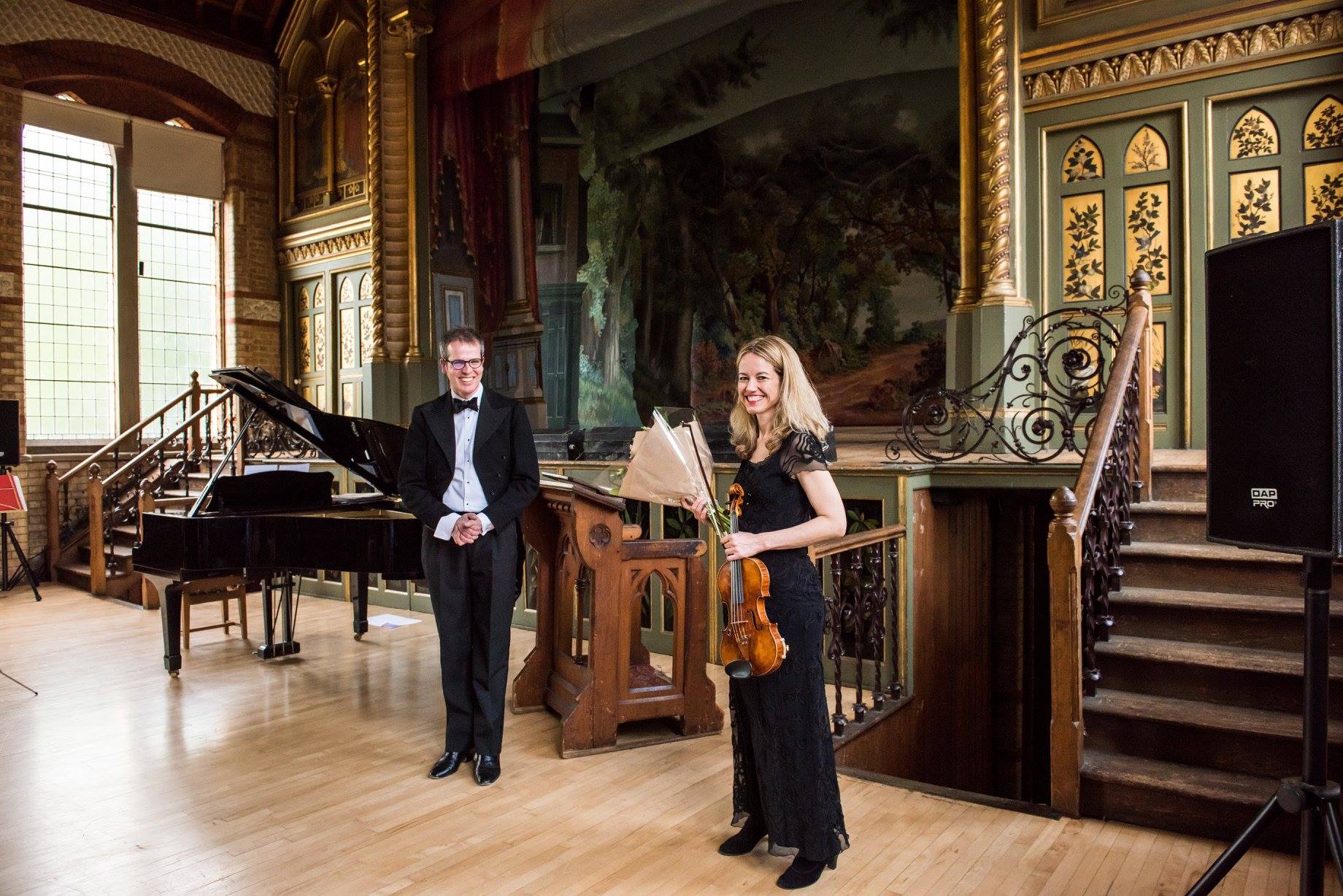 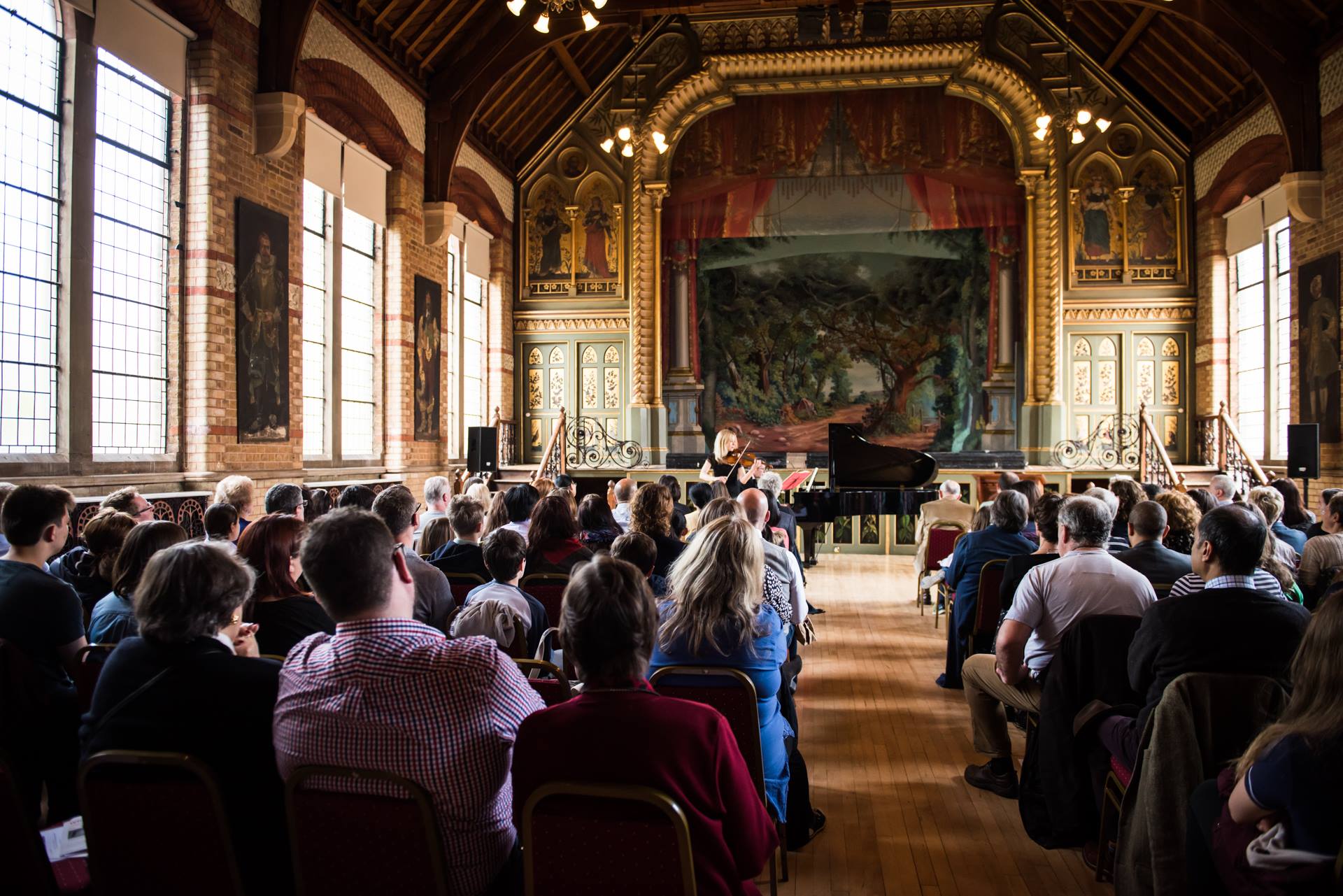 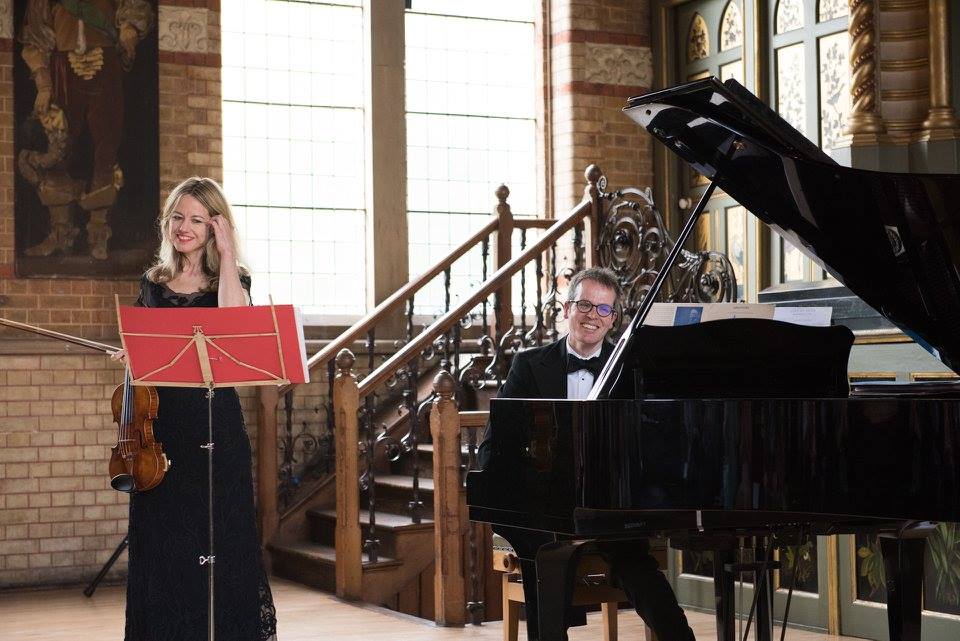 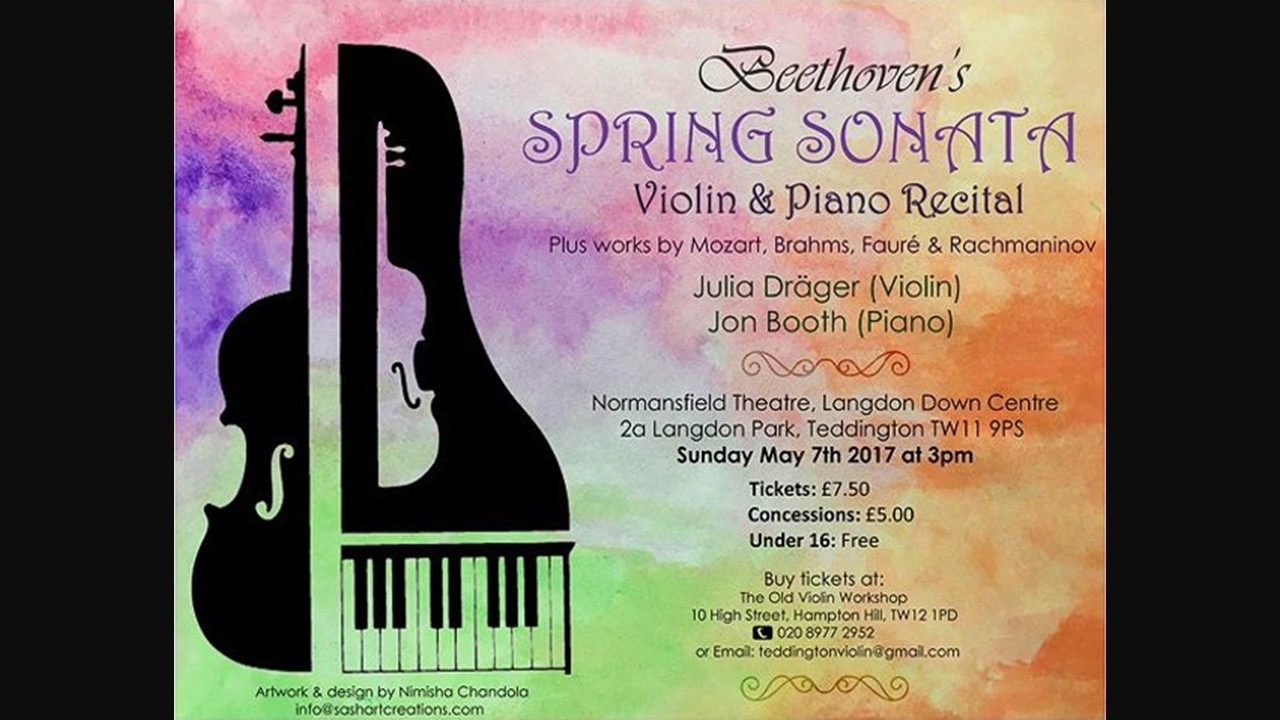 Mozart completed K304 during a visit to Paris in 1778. It was among the first of his mature compositions to be printed, originally bearing the designation Opus 1, as the 22-year-old sought to capitalise on the interest amongst amateur musicians to entertain friends at home recitals. This had already been a difficult tour. The celebrity which Mozart had enjoyed as a child prodigy seemed to have evaporated. And while travelling with the composer, Mozart’s mother became ill and died in July. Whether or not Mozart consciously set out to express his grief, the E minor sonata certainly has a dramatic intensity unlike the other works for violin and piano.

The first movement is more a study in continual change rather than the relationship between highly contrasting musical themes. Beneath an almost relentless quaver movement, the passage of time is marked by variations in the way that the themes are scored between the instruments, shifts in musical texture and new accompaniment figures. Although Mozart’s second theme is set in G major, it is a fleeting nod to convention. The music is drawn back toward the minor mode almost immediately.

As the exposition seems already to have reached a close, Mozart adds an unexpected coda: a version of the first subject transposed into a major key, and set in canon between the piano and violin. This dislocation – a sense in which the two instruments are playing out of synch – is only fully resolved when the first theme returns after the development section, played once again in unison. But when it does return, Mozart reverses the order in which the components of his theme are played. Nothing is the same, it seems. And everything is now firmly rooted in E minor.

The movement ends as it began, almost note for note. But the impact of this music, as a postscript, is transformed. The ominous undertone is gone, leaving a more resigned melancholy. The second movement continues the emotional journey, with its falling melodic strains and sighing suspensions. Although nominally a dance movement, the Minuet is marked “sotto voce” and the trio is more wistful than uplifting.

What’s in a name? Beethoven was no more responsible for the sobriquet “Frűhlings Sonata” in 1801 than he was “Moonlight” or “Pathetique”. All were labels added by commercially-minded publishers. But “spring” does seem appropriate in so many ways in describing the sonata’s enduring appeal. It is striking amongst Beethoven’s early music for its genial lyricism and flowing energy. There are certainly marked contrasts in mood. But the most animated of the four movements – a scherzo – offers a brief outburst of rumbustious good humour, rather than the darker clouds which break in the “Pastoral” Symphony No 6 composed between 1802 and 1806.

There is a sense of spontaneity, too. New themes tend to emerge organically from preceding ideas. And though he described the work (like Mozart’s K304) a “sonata for piano and violin” (note the order), Beethoven is clearly writing for equal partners. A good deal of the music’s charm lies in the way themes pass from one instrument to the other, often with embellishments and accompaniments which have an improvised quality.

The first movement – Allegro - is sculpted almost entirely from the most elemental of material. Major scales, minor scales, chromatic scales and arpeggios of every kind abound in what is, arguably, the most musically authentic and compelling of all instrumental studies before Chopin’s piano etudes. In contrast to the famous opening melody, the second theme is a “skyrocket” – a simple, rising arpeggio – much like the opening of his Opus 1 piano sonata. Other features of the 18th-century Mannheim composition school are prominent too, notably the crescendo to nothing. While the publisher’s title may imply a romantic storyline, the music is resolutely classical in style.

The second movement is a tranquil Adagio which develops from an exquisite ornamentation of the humble arpeggio over the most minimal of accompaniments. The theme meanders through an extraordinary series of shifting keys, exploring the deep sonorities of Gb major, before coming to rest in a series of slow trills which suggest the sounds of the forest.

The third movement is a breezy scherzo for the piano, with the violin cast as a most unwilling accompanist. Each brief attempt to take the role of soloist ends in failure, with the violin falling out of step – though never quite falling over. The joke is simultaneously a perfect foil for the Adagio and preparation for the finale which continues without a break.

The fourth movement is a rondo. A gently undulating accompaniment beneath the elegant theme immediately evokes the spirit of the first movement. Beethoven varies the melody after each contrasting episode, but it is always recognisable – first with syncopations and pizzicato accompaniment, then with jaunty dotted rhythms which ultimately collapse into babbling triplets.

While this scherzo is now established in the violin repertoire as a separate work, it was originally conceived as one movement of a sonata co-written with Robert Schumann and his pupil Albert Dietrich, and presented to the violinist Joseph Joachim as a gift in 1853. Brahms was just 20.

The three composers had taken their inspiration from Joachim’s motto “Frei aber einsam” (free but lonely), and the motif F-A-E was used perhaps partly as a device to unify movements composed separately. Brahms does not quote it directly but uses it to direct proceedings from the wings. The second mysterioso theme, played quietly over a tremolo bass, certainly takes its shape from the motto. But it is the falling and rising semitone (F-E) which is the most prominent melodic feature of this restless music, accentuated by octave leaps, hemiolas and cross-rhythms between the violin’s 2/4 time and the piano’s 6/8. The trio may be calmer, but brings its own unsettling effect. The angular violin melody is unusually conceived in strains of five bars and three bars. When the piano achieves some form of reconciliation, the moment is broken by a return of the hammering triplets on the violin’s lowest note.

This music is remarkable partly because it reflects so much of Brahms’ mature style. While so

much has been written about the composer’s struggle with the reputation of Beethoven for some 20 years in completing his first symphony, the sonata movement not only demonstrates originality in explosive terms, but does so in a musical genre – the Scherzo - so closely associated with his predecessor.

Does Brahms consciously quote the opening motif from Beethoven’s fifth symphony in this sonata movement – as he did in his first symphony? Perhaps it is too easy to hear the “hand of fate” knocking at the door when presented with a percussive triplet these days. What we do know is that Brahms reworked many early compositions and sketches. And so perhaps Joachim played a part in the Scherzo’s survival as the silent partner of the quartet. He kept the manuscript of the FAE Sonata after his birthday celebrations and only gave permission for the publication of just one movement - that of Brahms – but not until 1906, nearly a decade after the composer’s death.

Faure’s original song is based on an anonymous Italian poem freely translated into French by Romain Bussine. It tells the bitter-sweet story of a romantic flight with a lover and the aching realisation on waking that the ecstasy of the night is forever beyond reach:

The inspiration behind this short song lies in a poem by Semyon Nadson, about longing for peace: “the quiet somnolence evoked by daydreams”. Rachmaninov encourages performers to explore the opulence of this music with what must surely be the concise and trusting of musical instructions: “non allegro”. This arrangement is by the great Russian-born violinist Jascha Heifetz.

The catalogue of the virtuoso Austrian violinist and composer features a long list of short works originally attributed to (then) unfamiliar 17th and 18th-century composers. When the New York Times blew the whistle in February 1935, Kreisler pleaded modesty rather than deception: as a young recitalist, he had simply needed a range of shorter movements to balance his repertoire and considered it “impudent and tactless to repeat my name endlessly on the programmes”. Tempo di Minuetto has become an established part of the violin repertoire, now published in Kriesler’s name and merely “in the style of Gaetano Pugnani.”

Last works: at the Normansfield Theatre